Braille doesn’t have to be boring

We manufacturer high quality, vibrant  ADA compliant signs, which can be custom tailored around your brand guidelines. Options include PMS color matching and painting, window inserts or nameplate sliders, and standoffs available in a variety of colors and finishes. 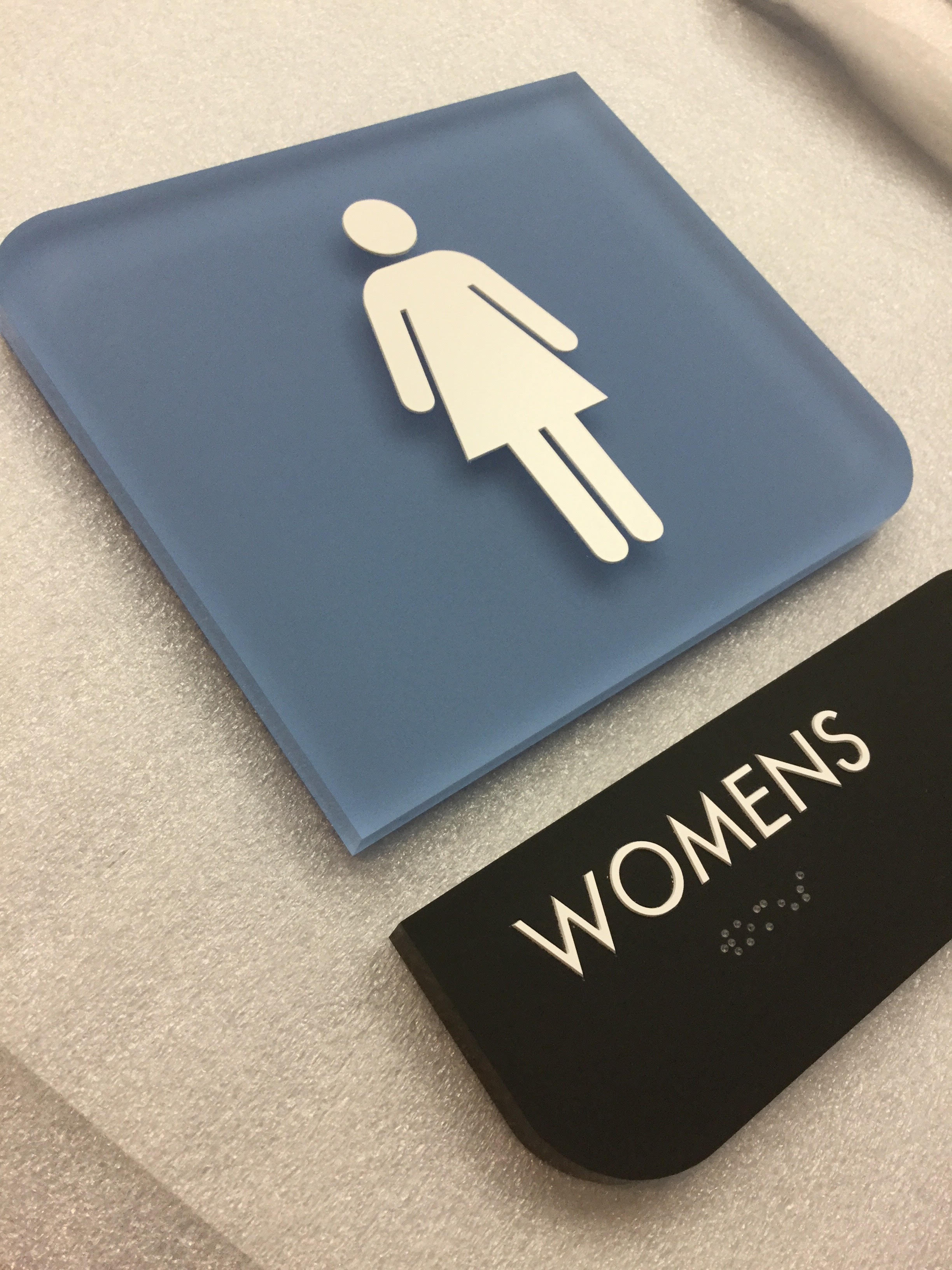 Back or “Second surface” painting gives the appearance of depth and beauty. 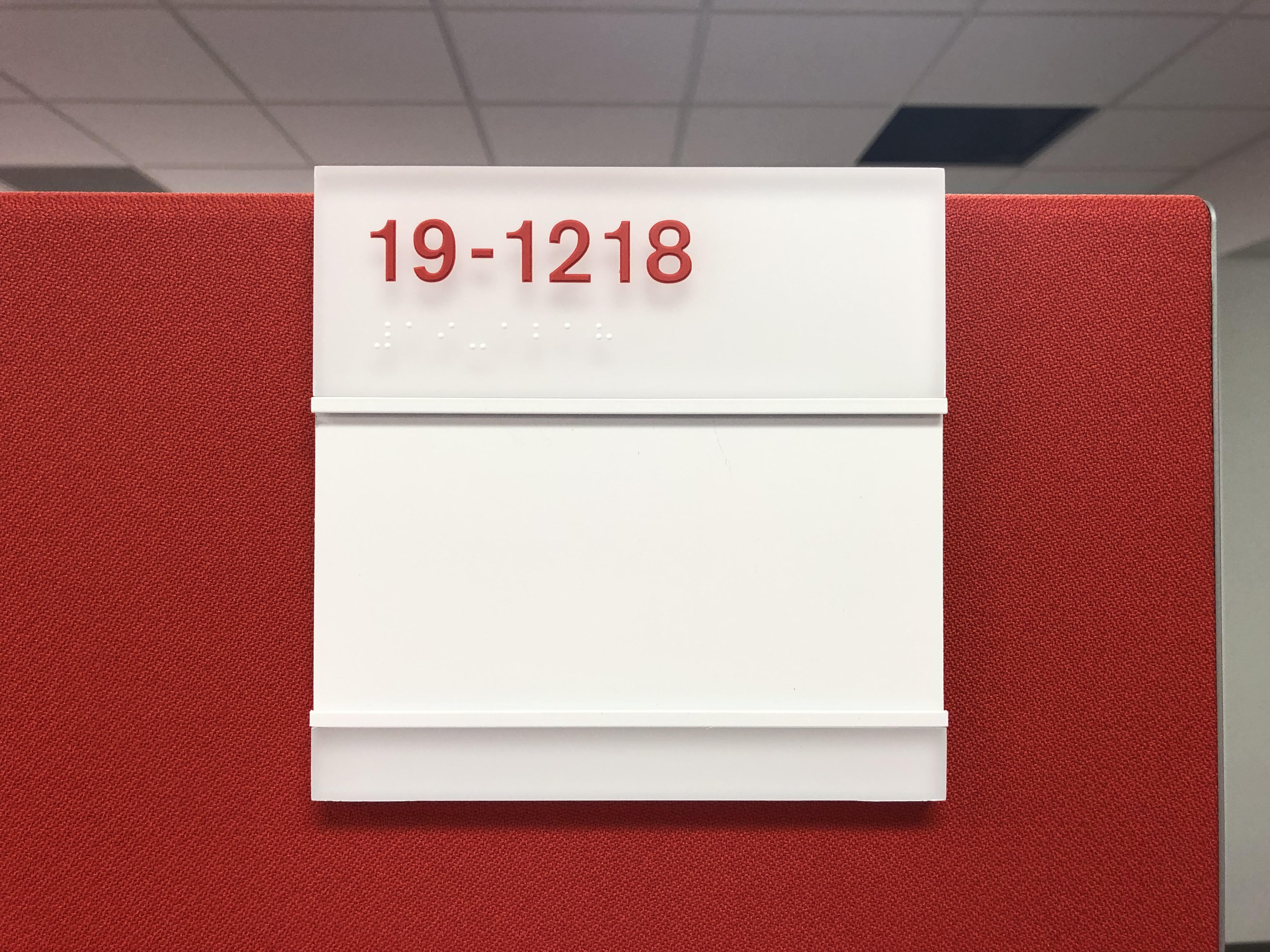 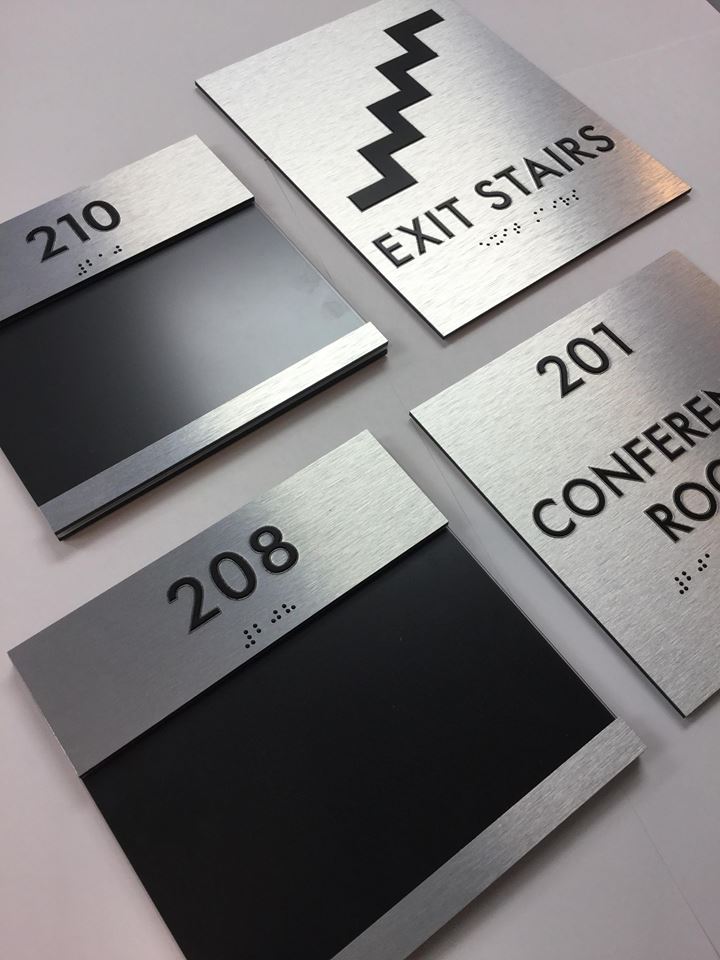 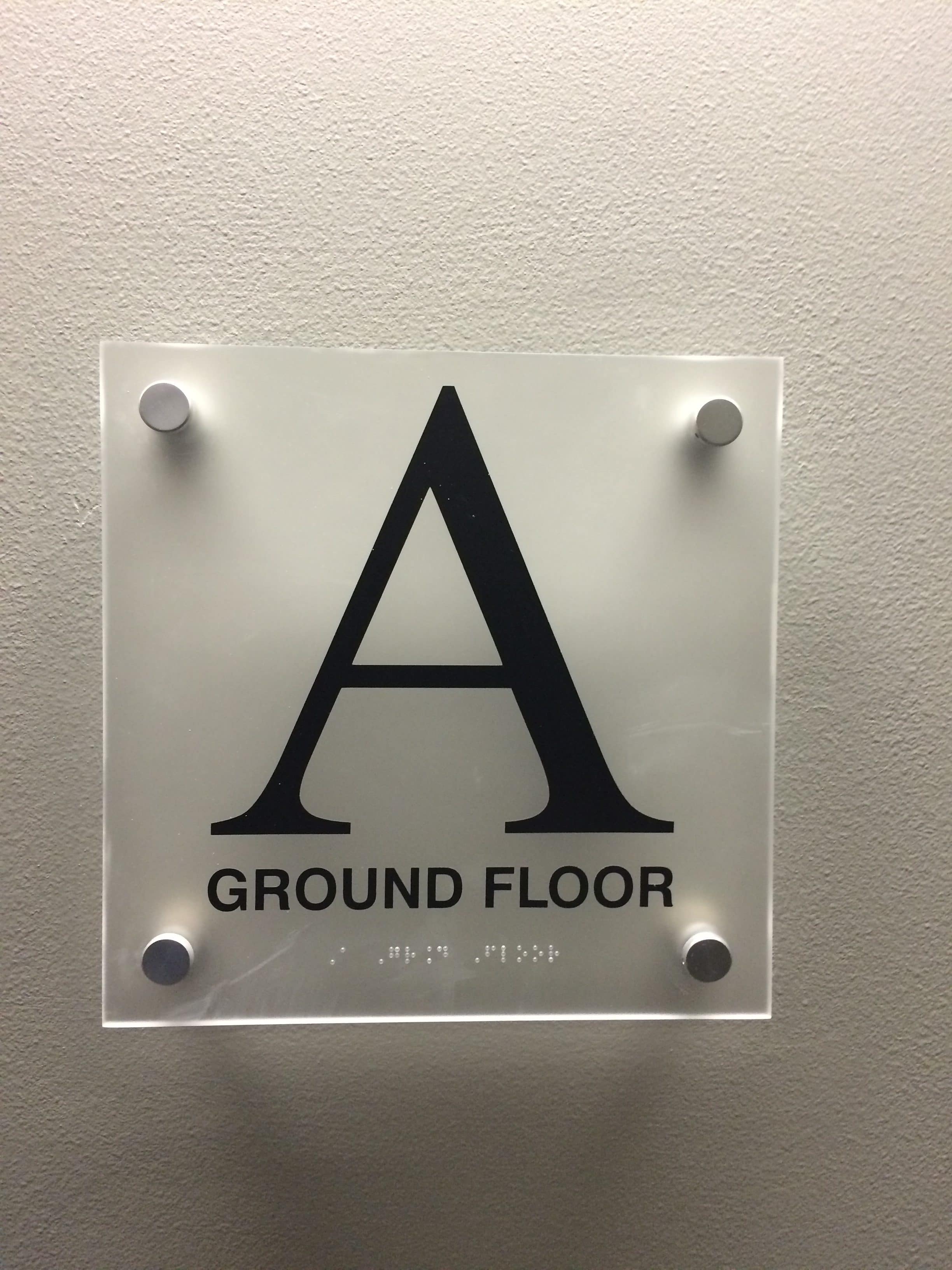 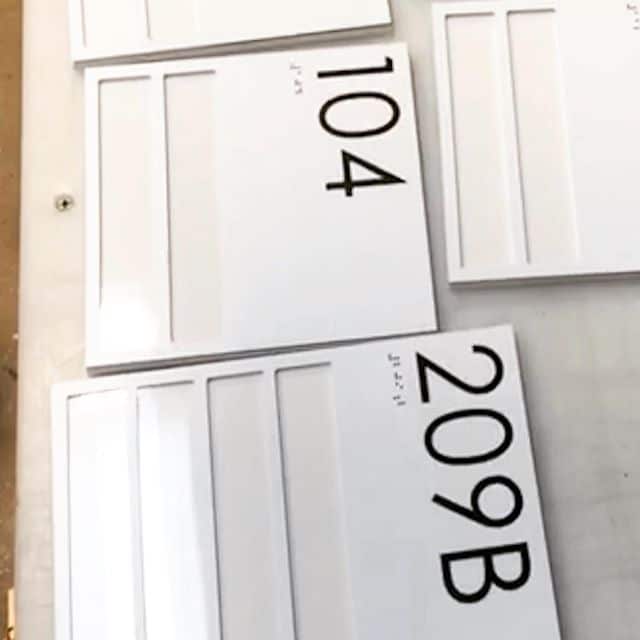 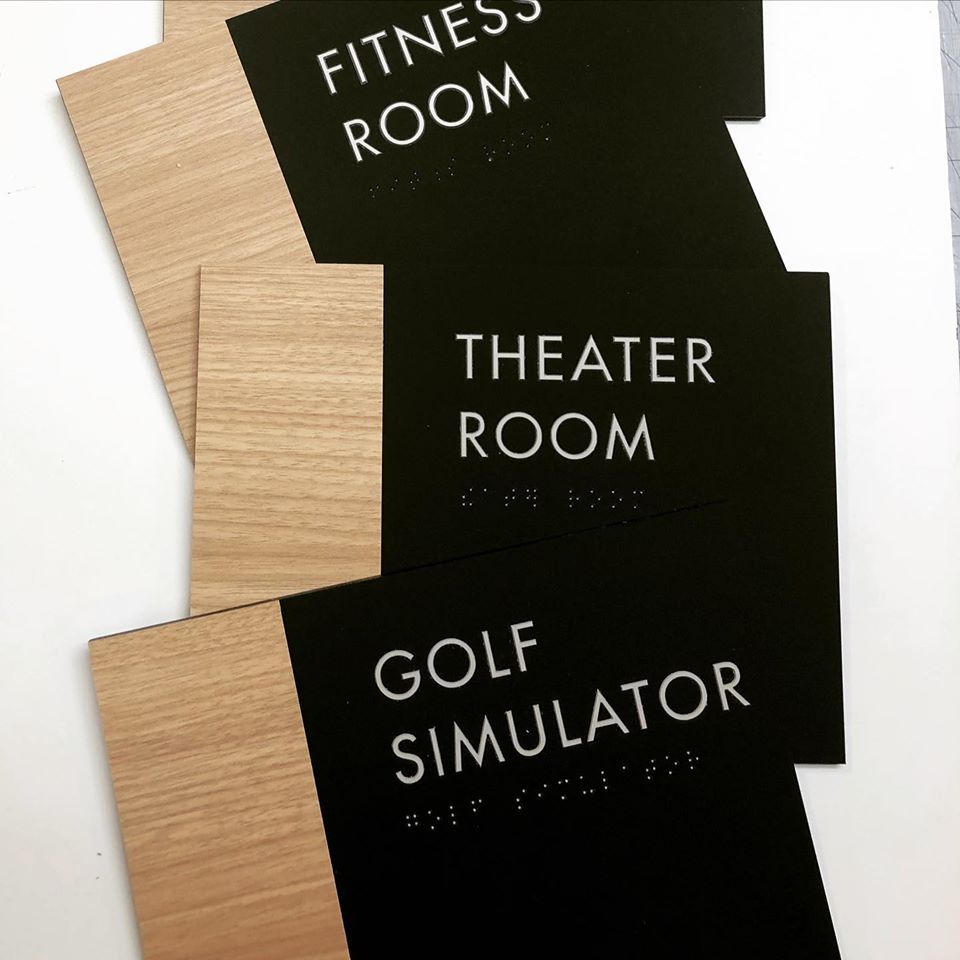 For an ultra modern feel

From West Chester with love

Custom made at our West Chester Pennsylvania facility, our ADA signs can be made quickly and shipped throughout the United States. We work with real estate companies, hospitals, universities, and sign shops.

ADA Signs are specific sign types, required by the United States Department of Justice to accommodate the visually impaired.

ADA is short for the Americans With Disabilities Act, which was signed into law by President George H.W. Bush in 1990. The law created, among other things, a set of standards for “public space” signage to accommodate for the visually impaired or blind.

In 2010, the United States Department of Justice released revisions to the original ADA Code and included design standards for ADA Signage. The standards outline requirements for raised elements, braille, and non glare finishes.

How are ADA signs made?

ADA signs are custom designed to fit your decor. CAD (Computer aided design) software is used to ensure compliance with the text height, spacing, and braille  requirements of the ADA.

A CNC (Computer Numerical Control) machine is used to create insertion points for the braille beads, and to cut out the raised elements. A CNC Router is then used to cut out the final shape of the sign (typically 6″ x 6″). Signs can be mounted with VHB (Very high bond) tape or fastened with standoffs.

Who needs to comply with ADA signage requirements?

A Business that provides “Goods and Services” to the public is considered a “Public Accommodation” and shall comply with the ADA. Specifically, US DOJ guidance lists the following categories for public accommodation, which must comply:

The businesses listed above are required to comply with the ADA regardless of the size of the business, or age of the property.

Where should ADA signs be placed?
Do all signs need to be ADA compliant?

No, not all signs need to meet the ADA requirements. Directories, logos, menus, and room occupant names are not required to comply with the raised element and braille requirements for ADA signage. Overhead hanging signs, similar to those seen in airports and hospitals also do not need to comply.

How much do custom ADA signs cost?

For custom ADA signs, like those made by Elmark, you can expect to pay $40-$60/ea on average. Some of the more elaborate, and labor intensive designs can range be as high $90/ea.

Can I save money by selecting a standard color?

Yes, absolutely. By selecting a standard color, you’ll not only save money but time as well.

Can you match my brands Pantone (PMS) color?

Yes! We can paint any sign to match your brand’s PMS color. Easy peazy lemon squeezy.

How long does it take to make ADA signage?

The size and complexity of the order will, in large part, determine the lead time. Expect an average of 1-2 weeks for standard color signs, and 2-3 weeks for painted signs.